This is largely a recap of the shiur from תשע״ה, with a slightly different twist. I’d like to look at Golden Calves, but not the one in this week’s parasha (at least not yet). Golden Calves come up in Jewish history:

Why Dan and Bethel? Rav Medan proposes that Bethel was the city closest to the site of משכן שילה, so Yeravam was creating his own “בית המקדש” at the historical site of the previous מקדש, before David moved it into his own tribe, into Jerusalem. It was a political move. But where does Dan come from? It comes from the story of פסל מיכה, from the very beginning of the Israelite settlement:

So ירבעם set up his two pseudo-temples at the historic sites of previous sanctuaries. I would assume from this that פסל מיכה, even though it is not described explicitly, was an עגל. So basically, the Jews worshipped Golden Calves almost continuously for 664 years (this week’s parasha, then a gap of 40 years in the wilderness, 14 years of Joshua and 40 years of Otniel, the first Judge, then 329 years of שופטים with פסל מיכה, then a gap of 92 years for Shmuel, David and Shlomo, then 241 years of ירבעם's עגלים). The Targum hints at this:

Generally we would read קמיהם as “their enemies”, but Onkelos translates it as “generations”:

It’s worth noting that this was never considered to be idol worship; it’s bad, but not that bad:

So why have a cow? Many say that this was a common form of idolatry in the surrounding cultures, so בני ישראל simply copied them:

And the bull (especially the winged bull) as a common Mesopotamian theme: 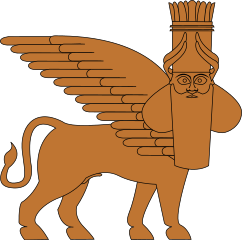 But I think there was more there there. This is one of many times that themes in the Torah seem to be “copied” from older Middle Eastern sources. The academics argue that this proves that the Torah is not divine, but Rav Kook argues that this only proves that the non-Jews got some things right:

The כרובים, the “carriers” of the “מרכבה”, of the Divine Presence, are an abstract idea that can’t actually be visualized. But something about the experience of נבואה in the minds of human beings gets translated into images of winged people/animals. And so when they asked of the עגל:‎ קום עשה לנו אלהים אשר ילכו לפנינו, the people were looking for something that represented the כרובים that they had experienced. And that was part of the role of the כרובים that would eventually be commanded:

כרובים, as a visual motif, had a number of forms:

And that is what ירבעם built:

I would argue that if you were looking at them, you would not be able to tell the difference between a כרוב and an עגל. The two terms are an editorial choice. Statues of כרובים are are commanded by ה׳; statues of עגלים are not.

But even if they are not meant to be images of ה׳, they clearly end up that way in the eyes of the Babylonians etc., and in the eyes of בני ישראל themselves:

So why have these dangerous images? I think that it is because they fundamentally do not represent ה׳; they carry the merkava. They represent us. It’s important that we know that we as human beings have a role in “carrying” the שכינה in the world. We have a place in the קודש הקודשים: